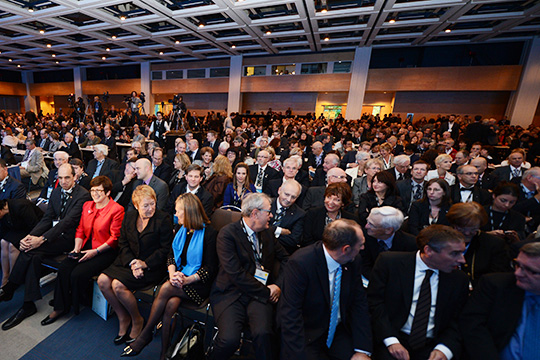 I just got home from the International Summit of Cooperatives, in Quebec City. My head is still grappling with the people and contesting ideas that swirled around me for four days. Generally, I hate conferences, but I am grateful I went, for a number of reasons, not the least of which that I had a chance to meet brilliant, inspirational coop leaders from other countries, especially Canada.

I traveled to the conference equipped with a long list of names of people whom my Southern Grassroots Economies Project (SGEP) friends told me I just had to meet. I copied all these names out on a card in a feeble effort to burn them into my brain, in the hope that somehow, I’d recognize them in the crowd of 2,800. (Believe it or not, I am shy, so this was frightening to me!) I arrived, picked up my translation equipment and sat down, thinking, “Now what? I don’t know a soul here!” I introduced myself to the woman sitting next to me. She was polite and immediately resumed her conversation with her friends to the other side — in French. I was really starting to sweat it, when a woman who was animatedly speaking with two other people walked down the long row of seats and sat down next to me on the other side. Serendipity! It was none other than Hazel Corcoran, Executive Director of the Canadian Worker Cooperative Federation (CWCF)! Hazel’s name was the top name on every list of suggested contacts that I received in advance of the conference! We introduced ourselves, and over the next three days Hazel made sure I got a chance to meet with just about everyone who cares about worker cooperatives in Canada and on the international scene. Thank you, Hazel!

Through these personal connections and in the course of a vibrant forum on worker coops on the second day of the conference, I became more solidly convinced of the importance of F4DC’s work in the area of worker coop development, as a primary vehicle for democratic, just, and sustainable economic development. I got lots of exposure to the benefits of consumer coops (especially credit unions—they were there in huge numbers) and producer coops. But it became clearer as the week went on how easy it can be for these kinds of coops to lose the thread of democracy. There is something about the worker coop movement — especially its assertion of the “instrumental and subordinate nature of capital” — that keeps worker coops grounded in the democratic principle of one person—one vote and the idea that humanity’s real power lies in our coordinated, productive labor from which we generate community wealth.

Don’t get me wrong — I learned about lots of principled, successful consumer and producer coops at the conference. But I also saw how many coops are coops in name only, especially some of the very large ones. In fact, the dominant paradigm of the conference, as promulgated from the main stage via a stream of “experts” from McKinsey & Co, Deloitte, Price Waterhouse Coopers and the Harvard Business School, was that coops should do a better job adapting to capitalism, and grow (up) into mega businesses using more or less the same unsustainable business practices of the mega-corps. And that we should accept the current capitalist frame as the only possible economy. Sure, these experts conceded, the global financial crisis (or GFC as many called it) shows us that capitalism has had some problems, and maybe capitalism can learn a thing or two about sustainability from coops. But the cooperative model can only ever be a small portion of the capitalist economy. After all — capital has other plans!

What was really encouraging was the steady growth, throughout the four days of the conference, of a noisier and noisier pushback against this paradigm, coming from this very polite crowd! Sonja Novkovic began the critique on the very first morning, asserting that coops needed to guard against becoming part of the problem by developing new kinds of growth models rooted in values. By the last day, several main stage speakers (Jacques Attali, Felice Scalvini, and Ricardo Petrella in the final panel) cogently and directly critiqued the capital-centric focus, and called on the cooperative movement to establish itself as a revolutionary, new kind of economy that will replace capitalism. Whenever any speaker would make a comment along these more hopeful lines, the crowd applauded wildly!

I return to our work in North Carolina and the U.S. South more hopeful than ever, more convinced we’re onto something vital in our focus on cooperative economic development, and absolutely terrified by the work we have laid out for ourselves. Thank heavens we have some more friends around the globe to help us figure it out!