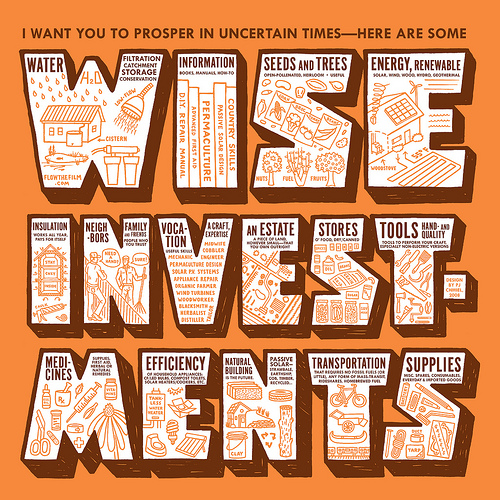 From a social justice “purist” standpoint, there is only one stance toward investing in stocks and bonds and other capitalist instruments: don’t do it. That approach might appeal to folks who like to claim that they haven’t sullied themselves with capitalism, though I don’t think it’s an honest claim. It’s just not possible to live in the United States and stand free of the economic system in which we all live. Have a job? Buy food? Pay rent or a mortgage? Sell stuff to make your living? These activities are not intrinsically capitalist, but the ways these activities work here and now in the United States tie them into the larger capitalist economic system. That’s one of the features of capitalism—it’s constantly growing and to feed itself, it sucks in ever more of what used to be held by individuals or families or held in the commons. So good luck standing clear of it.

Don’t get me wrong, I’m an anti-capitalist, and F4DC operates from an anti-capitalist stance. We think humans can—and must, for our very survival—do better than capitalism. That’s why we’re part of a growing movement focused on developing a new kind of economy to replace capitalism: one where people and planet come before profits. Where the rewards of productivity go to the people who do the work. Where communities are enriched, not stripped, by businesses that are rooted in place. An economy built on the principles of cooperation, sustainability and solidarity, not competition, short-term gains and exploitation. We’d like to see this new economy become real in our lifetimes, so we’re devoting a good deal of time and other resources to various economic development efforts.

One part of this work is to recognize the importance of solidarity, so even if it were possible for some of us to stand completely clear of capitalism, I wouldn’t generally want to be the first to opt out—unless, working with others, I found something that was inspiring, scalable and replicable. Some kind of economic base that was available to significant numbers of people, across all kinds of communities. This is in contrast to a more individualistic effort to personally avoid being tainted by capitalism’s ugly features. That individual approach just doesn’t have much effect on many people’s lives in a system as big and durable as this one.

The other thing that’s relevant here is our history: F4DC came into being through a loving bequest from my dad (see that story here). Our financial resources originate in a wide range of investments Hayden Thompson made in companies and ventures, all of which were thoroughly situated in capitalism. So we’re in it up to our eyeballs anyway.

F4DC wouldn’t exist if it weren’t for this history and this money. Without it, Ed and I would have figured out some other way to work on grassroots democracy, ending capitalism, and all the other projects that are inspired by our mission. But right now, we have the daily dilemma of what to do with this money. Everyday we wonder, “Is it possible to use money to build grassroots democracy that makes communities better places to live?” We think we’re figuring out some ways to do that. That means we are very serious about stewarding this money so that it makes all the difference it can make.

All this is to say that we plan to strategically invest F4DC’s financial resources into the stock market and other garden-variety capitalist investment instruments. That means investments in corporations for the most part. We’re doing it because we’re looking for some kind of return that allows us to extend our financial reach with grants and support for social and economic justice organizing.

Since we’re investing in this dicey capitalist enterprise, we have to develop some kind of relationship to it. And that’s why we have an investment policy. We’re not delusional—we don’t think that any investment policy can protect us from the embarrassments and horrors of capitalism. Let’s face it: corporate capitalism invents new embarrassments and horrors all the time, in its pursuit of profit over people and the planet. But we can stand next to our investment decisions with more integrity if we try to be honest about what our bottom line is.

This is our first crack at an investment policy; we expect it to evolve over time. But here it is as of March 14, 2011, on the eve of making our first foray into the world of investing.