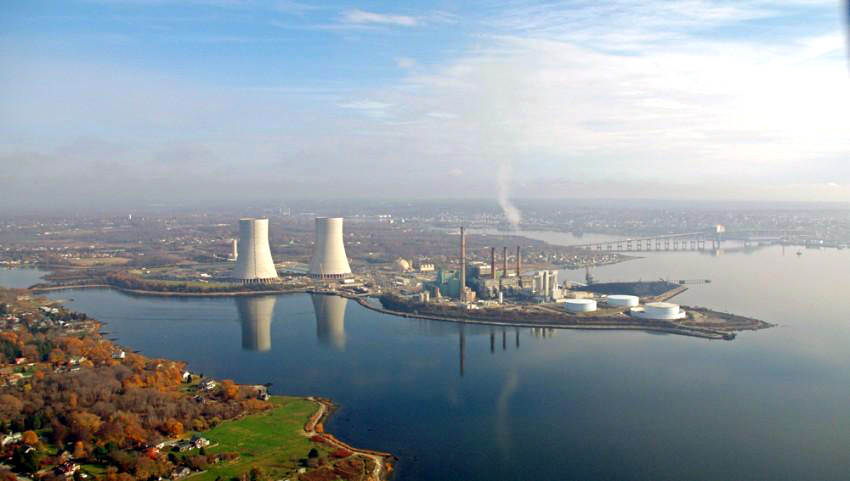 Going out to Metacom’s Chair, which sits overlooking Mouth Hope Bay, the City of Fall River, Massachusetts, and what was once all land that my Pokanoket and Pocasset Wampanoag ancestors inhabited, was a frequent occurrence throughout my childhood. It’s been over 400 years since Metacom, the Sachem of the Pokanoket tribe and also known as King Phillip, sat in that chair to see the land and bay. Over the past 400 years the landscape has shifted drastically, much of it due to the colonization that has taken place, which also impacts the increased shifts in climate change. If one is to sit in that chair today the current view is something like this.

This is the Brayton Point Power Station, a coal and fossil-fueled power plant that was built in the early 60s. The coal that is converted to electricity is shipped from Kentucky, Colorado, and the country of Columbia, and is used to help power much of eastern Massachusetts and northern Rhode Island. Since the power station has been built the air quality of the region has dropped significantly, and last it year received a failing grade on the American Lung Association’s State of the Air 2013 assessment. More can be read here on the air quality.

The effects of the power plant, the energy industry at large, and countless more ecological offenses, are inspiring people to mobilize. In May two men on a small lobster boat blocked the waterway to a coal carrying ship, preventing entry to the power station. And then this past July people from all over New England gathered in direct action and resistance resulting in the arrest of 44 people.

They were taking a stand against the coal industry, and taking a stand for the future, for our health, for our children, and the seven generations ahead. This act of resistance is coming during a heightened wave of environmental activism globally. From divestment campaigns and anti-keystone pipeline efforts being promoted by Green for All, 350.org, The Hip Hop Caucus, The Sierra Club, Energy Action Coalition, Indigenous Environmental Network, these efforts are being championed by the everyday people of this earth. People in the struggle are currently employing tactics of direct resistance, creatively and consistently, for environmental justice.

When thinking about resistance, in this specific case, I can’t help but think about Weetamoo. Weetamoo was a Pocasset Wampanoag Sachem, a contemporary of Metacom, who at the very location that the Brayton Coal Power Station is located drowned herself instead of being captured by the English, some 400 years ago. By taking her life when escape seemed unlikely rather than surrendering she was sending a message of resistance. Weetamoo is one of my shero’s, as are the 44 people who carried out direct action at Brayton Point in July. I applauded the role of resistance, and often the creativity involved, but must implore of us to not forget to in the same breath of resistance, we must also be advocating for change, and also doing for ourselves.

In doing for ourselves we need to create alternatives to our coal and oil dependencies, We need to create the world we want to be living in while we’re resisting the old one. We can’t just close the coal plant without a plan, for many people’s health would be affected (albeit many of the health issues people face are from such extractive energy sources being burnt off and being released into the air and water). We need to be working for job creation, since so many people are dependent on the jobs provided by the extractive energy industries. We need to create full systems solutions.

In this very location of Brayton Point we have so many layered histories, we are standing on the shoulders of giants. Let us honor the vision, work and struggle of Metacom , Weetamoo, and the many others yet to come. So together, here’s to building the new economy that is democratic, just, and sustainable.

One thought on “Sitting in Metacom’s Chair”