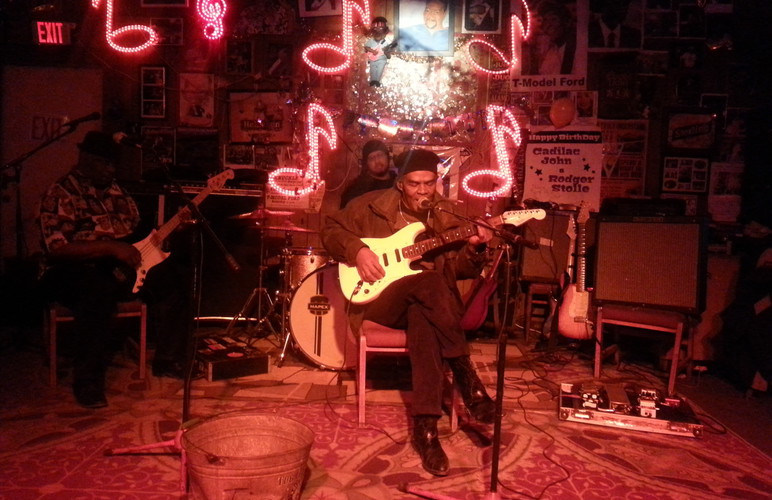 Ed Whitfield recently spent a few days traveling through the Mississippi Delta. Here are some photos and reflections from that trip. The above photo was taken at Red’s Blues Club in Clarksdale MS.

A stop in Mound Bayou MS is always inspiring to me. This is the cradle of Black independent development in the USA.

Founded by former slaves, this was the first and largest Black town in the U.S. It boasted having the best health care in Mississippi. It had a successful bank, insurance company and later an agricultural cooperative that ginned it’s own cotton and treated people fairly. There was a big business in sweet potatoes too.

The fraternal group whose sign you see below grew out of a secret society which had planned to recruit an army across the country to fight to free slaves. It gave up these plans only after the civil war broke out. The hospital that it founded offered care to people from all across the state. The boarded up building in the photo is the lodge hall of the International Order of Twelve Knights and Daughters of Tabor.

Despite its small size and poor funding, Mound Bayou had – and still has – excellent schools, winning competitions against larger better funded schools across the state in music, academics, and sports. The girls just won the state basketball championship with a 31 – 0 season. The schools are being threatened with closing from consolidation efforts to increase diversity and gain more funding. This will be a great loss. The Riverside Hotel was once a black hospital in Clarksdale Mississippi. The room I stayed in, shown below, was one of two operating rooms. I mused about how many people had died there and that is when I was told that Bessie Smith was one. She never regained consciousness after an operation in which her right arm was amputated following a severe traffic accident.

In the period since its conversion to a hotel in the 1940’s, many other notable entertainers stayed there. Now it is the temporary home for blues tourists from Europe and Japan who are seeking more authenticity than comfort. There are common toilets in the hallway, and if you get cold during the night you can knock on the wall and the host will come into your room to light the un-vented heater. But two people can stay there for $65 which includes tax. Leaving Clarksdale Mississippi this morning, the site where bluesman Robert Johnson allegedly sold his soul to the devil in exchange for musical skills, I passed the Hopson plantation. Over a thousand slaves and their share cropping descendants once worked on this plantation. The former slave owners sold the homes of black agricultural workers to the devil for a mechanical cotton picker made by International Harvester.

In 1943, newspapers from across the country came to witness the beginning of the end of blacks in cotton. From split school sessions that subordinated education to the cotton season, to being totally dispossessed from the land in little more than a generation, it was quite a transition. This picture shows the commissary at the Hopson plantation which is now converted into a blues venues with an on-site motel where visitors can stay in a remodeled, air conditioned share cropper shack. This morning before leaving the Mississippi Delta, even though I was running late, I had to stop by the memorial to my hero Fannie Lou Hamer in her home town of Ruleville MS. This is a bigger than life bronze that overlooks her grave site on a small park.