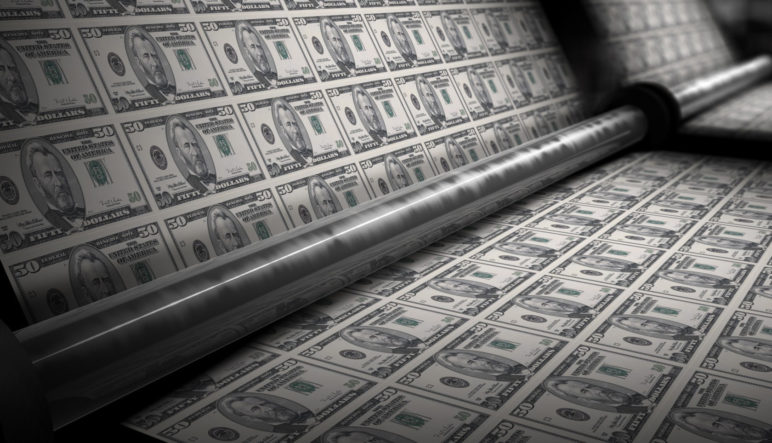 I’ve spent a lot of time lately speaking against the establishment of a guaranteed minimum income as an important policy to advocate. I want to make a few things clear:

But, even so, I oppose fighting for a guaranteed income. Let me explain why.

First I want to be clear that it is simply more widely available welfare. Second, it would only help people have more access to consumption without altering anything about how production is organized. Third, it would not alter wealth distribution and ownership. And finally, it would require a new bureaucracy staffed by agents and experts to regulate and allocate this universal distribution of money.

My objections have surprised many people, but I think they are consistent with what I do think is the solution to our economic justice problem. I favor deep democracy replacing the rule of capital in our lives. This would require reparations and the reconstruction of the commons, but this time including the earth and the fungible financial resources that have been created by our labor within exploiting systems.

According to an article in the Atlantic, (The Conservative Case for a Guaranteed Basic Income, by Noah Gordon, AUG 6, 2014) the guaranteed income proposal isn’t new.

As Frum notes, Friederich Hayek endorsed it. In 1962, the libertarian economist Milton Friedman advocated a minimum guaranteed income via a “negative income tax.” In 1967, Martin Luther King Jr. said, “The solution to poverty is to abolish it directly by a now widely discussed measure: the guaranteed income.” Richard Nixon unsuccessfully tried to pass a version of Friedman’s plan a few years later, and his Democratic opponent in the 1972 presidential election, George McGovern, also suggested a guaranteed annual income.

What could possibly prompt such a wide range of supporters?

Our economy suffers from the fact that communities are not having their needs met and the quality of life equitably elevated by all. Neither the self-regulated market nor the intervention of government has been successful in doing this to the satisfaction of the many. The lack of purchasing power of working class people is a factor in the cyclical crises we face. The few who are privileged within and dominate the existing system induce others to believe that rather than oppose their domination and exploitation, we should instead struggle to emulate the rich and then all of who are worthy could be successful and take care of our responsibility to others. We are also told not to bother to understand how we got into the situation we are in, but rather forget the past and look ahead to the future.

Reparations and the cow

Those who argue the loudest for letting the past go are those who continue to benefit from the disparity. Their call to forget the past is a call to allow them to retain their unearned privilege, pretending that they deserve it.

I’m reminded of a story that I was told by Rev. Bugani Finca who was involved in South Africa’s Truth and Reconciliation work. A black South African, Tabo, confronted a white man, Mr. Smith, who had disrespected him and stolen his prize cow. With the prospect of amnesty for telling the truth, the white man admitted to having done what he was accused of, recognized how horribly wrong it was and asked for forgiveness, saying that he was truly sorry. Tabo was visibly relieved for having an opportunity to confront his oppressor and get an apology. They shook hands and embraced. As Mr. Smith, stood to leave, free, with his amnesty, the black man called out to stop him. The white man turned back with a questioning look on his face, not sure why he was being stopped, Tabo, the black South African, asked him: “But what about the cow?” Mr. Smith was visibly angry: “You are ruining our Reconciliation,” he shouted, “This has nothing to do with a cow.”

That is the question we must ask to all those who say that the past is long gone but still retain ownership of the herd produced by that old cow. We won’t forgive and forget until we get the cow back. But just suppose that the Mr. Smiths in the world make a counter offer: “I’ll tell you what, why don’t I just give you a supply of butter?” “The hell,” Tabo might reply, “If you give me back my cow, I can give you butter!”

Guaranteed income is a supply of butter. More than that, it makes two assumptions, both of which I think are false: It assumes that the government can simply pay out the money without having other negative consequences for the economy as a whole, and it also assumes that there is a rational amount of money and process for its allocation that experts can figure out and apply fairly.

What I do believe to be true is that with Labor being the sole creator of value, there is no place for the money to come from but out of the social surplus, either as taxes or reduced wages. There is a political and economic price to be paid that cannot be avoided. I also have a healthy distrust for decision making by experts. Typically, in spite of their declarations and the veneer of objectivity, they are guided by the class interests of those deeply entrenched in, and benefiting from the status quo. I have never heard that there would be a deeply democratic regulatory process to work out the details of a guaranteed. . If you would like to see how hard this is to implement, look at this article by someone deeply involved in efforts to make this work about 40 years ago.

What I do think we need is reparations, the democratization of wealth, the recreation of the commons and the outlawing of theft and speculation. I think that communities must become their own developers through broadly democratic planning any democratic access to non-extractive financing. The details of how these things are done is the content of many more pieces. But the key is democracy and expanded opportunities to be productive rather than enhanced consumption. We need the cow back, not just a supply of butter.

Finally, I want to say that even though some conservative economists and politicians have found guaranteed income something that they support, there is widespread opposition and a serious political struggle would need to be mounted to attain that end. I would hate to see us squander that much of our energy, resources and time on what would objectively be a giant welfare system.

Dara Cooper, a good friend of mine ended an email to me with this quote:

We can even produce more than we need. Unfortunately, because of lack of organization, we still need to beg for food aid and has kept us thinking that we can only be beggars who need aid. We must produce more because the one who feeds you usually imposes his will upon you. -Thomas Sankara, Burkina Faso

This is why I oppose guaranteed income “…the one who feeds you usually imposes his will upon you.” We have enough of that already.

5 thoughts on “Nevermind Guaranteed Income, we want the cow”