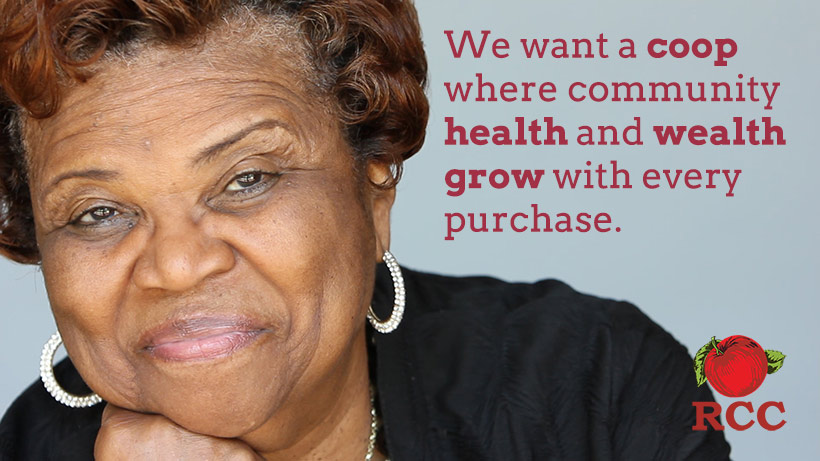 Over the next 15+ years there were many efforts to lure a new grocery store into the space. However, while the store would be profitable, it wouldn’t be profitable enough to satisfy the demands of the shareholder-based economy of a large corporation. Fed up with waiting and, essentially, begging for access to affordable, quality food, residents in this predominantly African-American and low-income community decided to open their own grocery store.

After learning about cooperative businesses they decided to open a community-owned grocery store. The store, the Renaissance Community Cooperative, would meet the community’s dual needs for access to quality food and dignified, good paying jobs. When the RCC opens in 2015 it will be a conventional grocery store (think of a Food Lion or Kroger) where wages start at $10 per hour.

Can cooperatives like the Renaissance Community Coop play a role in making affordable food accessible to low-income communities? Can they provide good paying jobs to communities that desperately need them? Can they create community wealth in some of our most blighted neighborhoods? There are those who believe they cannot do these things because cooperatives will not work unless your community is wealthy enough, educated enough and white enough.

But the RCC project is showing everyone that cooperatives can and will be used to solve these problems. Indeed, the struggle the RCC community is undertaking draws on the rich history of cooperative economic development found in poor communities of color. This history has been beautifully unearthed by Jessica Gordon Nembhard in her recent book “Collective Courage.”

So, while the residents in Northeast Greensboro just wanted get grocery store, they are doing something much bigger and more important. They are demonstrating that grassroots communities of color, that are dismissed by some as inadequate, do have the power and ability to develop their own economic future.

The video above was produced by the Renaissance Community Coop. Become an Owner today at http://renaissancecoop.com/ownership.